Posted on November 29, 2012 by angelvancouver 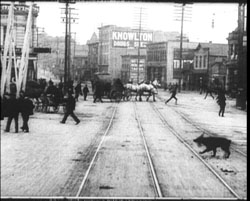 This great six-minute film shows the early days of Vancouver and Gastown — it is the earliest film footage of the city, whose population was only 27,000 in 1901. It was shot by Seattle filmmaker William Harbeck, who was hired five years later to film the maiden voyage of the Titanic; he died at 44 when the ship sank the night of April 14, 1912. More info about the film is here.
The film is set to the song “Calendar” by Your Hand in Mine, a Greek duo who performed the song live in 2007 at the Thessaloniki International Film Festival for a screening of a 1933 Japanese silent film masterpiece, Yogoto no Yume (Every Night Dreams).

The film begins on Granville Street at Georgia, heading north past the second-floor studio of Vancouver painter Emily Carr at 570 Granville, then turning east onto Hastings and down to Carrall, north on Columbia to Cordova, and west on Cordova, turning south on Cambie; it seems to skip to Davie Street in Vancouver’s West End, ending around Bute Street, where mansions were being built. There is only one automobile seen on the street during the film. It’s mainly people walking, riding bicycles or horse-drawn buggies.

The streetcar system began in Vancouver in 1889 and eventually expanded into the suburbs and the Fraser Valley (the Interurban Line). This second film shows the streetcars operating in the 1950s, just before they were retired, replaced by the round-topped Brill trolley buses as part of the “rails to rubber” modernization campaign.

This third film shows the streetcars leaving the Carrall Street tram “barn,” which was across the street from the Army & Navy store on Hastings, and going to New Westminster; it is narrated by former “motor man” on the Central Park/Burnaby Lake line.

This 1962 Vancouver Board of Trade film shows the last of the streetcars in 1955. And in this fifth film below, commissioned by the South Granville Business Improvement Association, civic historian John Atkin explains the history of expanding the Vancouver streetcars over False Creek to South Granville in 1891 to develop the area. It has some great historical footage of Granville Street when it was just a wagon trail through the forest.

The Vancouver Historical Society in 2007 produced this film, tracing the route of the 1907 film:

I also included this short film because of the issue in the news this week: A transit plan was unveiled to put a bored subway tunnel under Broadway to the University of B.C., at an estimated cost of $2.8 billion. There has been a call to bring back streetcars along Broadway at a fraction of the cost. I’ll leave that to the transit experts to resolve. But I still think there was an opportunity missed during the 2010 Olympics to keep the streetcar that went from Granville Island to near Science World — the free demonstration service ran on the Downtown Historic Railway using two modern Bombardier Flexity Outlook streetcars borrowed from the Brussels transit system. We shipped them back, post Olympics.

Bombadier tram used during the 2010 Olympics in Vancouver Canada

The City of Vancouver and the administrators of Granville Island had paid $8.5 million for upgrades to the rail line. The plan was to expand the tram route through Chinatown, Gastown and Stanley Park. Two heritage streetcars, built in 1905 and 1912 (the latter is shown below) had continued to travel the route until last summer, when operations were halted due to financial constraints.

At the very least, I have made phone calls, trying to convince city officials and transit authorities to restore the westbound Powell Street bus service past Main and along Carrall street (my Gastown store is at No. 2 Powell); bus service was halted five years ago (!!!) for construction of the Carrall Street greenway project, which was completed years ago. But so far, my entreaties seem to have fallen upon deaf ears.

Update Dec. 4, 2012: Los Angeles has approved spending $125 million on a new streetcar system for downtown. The story is here.