My mother, Holly Haliburton, was a big part of my store. Long-time customers will remember her because she worked in my store for 30 years. Until five years ago, when macular degeneration robbed her of her eyesight. She did spend a day at the store last summer, when she went outside and sat in a chair in the sun, talking to everyone she knew who passed by.

My mother recently died at the age of 95. There is a photo of her that I keep in my store, showing Holly as a young mother and myself at about two years old. Lately, friends and customers have been bringing me flowers, which I put beside the photo.
Here is the obituary for Holly:

Holly Margaret Haliburton
Dec. 13, 1917 to Feb. 17, 2013
We are saddened to announce the passing of our dear mother at the age of 95. She was predeceased by her loving husband of 53 years, Jack Haliburton, who died in 1998, her parents, James Nichol and Sarah (Bertha) Hamilton, and 11 of 13 siblings. She is survived by her brother Bill Nichol and his wife Joyce of New Brunswick; her daughter Jackie (Neal), her son Jim, and her adult grandchildren Eli (Negar), Rachael, Becky and Jeremy.
Holly was born in Black Lands, New Brunswick. She skipped three grades in school and was a teacher by the time she was 15 at a one-room schoolhouse. During the war, she worked as a civilian for the military in Moncton, where she met Jack at a dance, a young Toronto-born officer who was teaching young pilots how to fly. They married in 1945, six weeks after they met, and after the war moved west, first to Calgary, where Jack started his own real estate firm, Campbell & Haliburton, and founded the Alberta real estate board. After the birth of their two children, Jackie & Jim Haliburton, they moved to Edmonton for five years and then to the Glenmore area of West Vancouver, where Jack built many homes and started a mergers and acquisitions business.
During the 1950s, Holly could be seen driving the kids to soccer and band practice in her pink 1957 Chev convertible, with the radio turned up too loud, embarrassing her children. After Jackie graduated from school in 1965, she attended Chouinard Art Institute in Los Angeles, and the family soon followed, settling in Encino, where they were next-door neighbours to Michael Jackson and his family during the Jackson 5 heyday.
Holly loved entertaining in those days, when hundreds of neighbours would flock to her Christmas parties, where she would hand out a gingerbread likeness to each guest. She loved and embraced people, without judgment, and was always a positive person right to the end.
Jack & Holly returned to West Vancouver in the early ’80s, when Holly began working in Jackie’s store, Angel, at the age of 60. She worked at the store for 30 years and became a part of the lives of Angel customers, who treated Holly like a surrogate mother. She called everyone “Dear.”
She lived life to the fullest and had no regrets. Her positive attitude was an inspiration to many who knew her, especially Laurie Haliburton of North Vancouver, Ann Danton of England, who was like a daughter to Holly, Dr. Rob Scott of West Van, Lynn Thomas, and Joe Diblasi, both of California.
Holly spent the last two weeks of her life in the Heart Centre at St. Paul’s hospital after a major heart attack, with her family and friends by her side, including Ingrid, Linda, Wayne, Ruby, Regina and Barb. Special thanks to Linda & Ingrid for their many hours at the hospital. She put up a valiant fight to live, cracking jokes days before she died, but her time eventually ran out. She died in her sleep in hospital, with Jackie at her side and Jim on the phone. The family would like to thank all the doctors and nurses at St. Paul’s for the great care they gave Holly in her final days. Holly is greatly missed by all who knew her.
For the date and location of the celebration of Holly’s life in April, email jackiehaliburton@hotmail.com

Click here to see The Vancouver Sun story detailing what happened to my mother after she died.

A customer who had lost her mother two weeks earlier brought me tulips to the store, which I put beside Holly’s photo. I also painted this T-shirt of the tulips to ease my grief. A Gastown neighbour bought the shirt as soon as I put it in the window. He said he was going to put the shirt on his wall as a piece of art. He said he felt an energy from it. 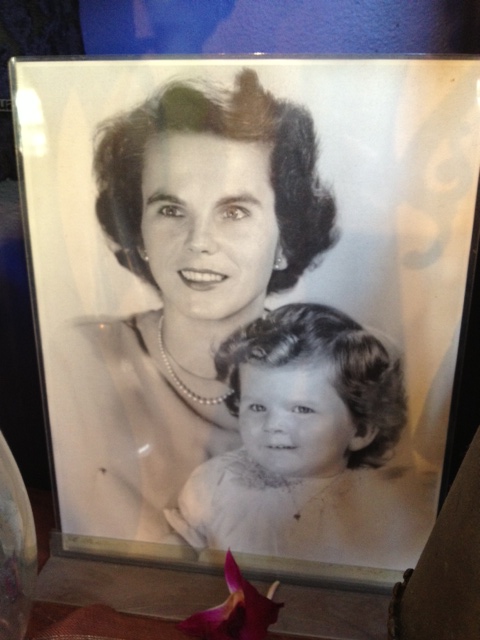 Angel is Vancouver's first Desigual boutique. We've been in business since 1978.
View all posts by angelvancouver →
This entry was posted in Uncategorized and tagged Remembering Holly Haliburton. Bookmark the permalink.