Is that movie director Tim Burton in front of my Gastown store?

Posted on June 4, 2013 by angelvancouver

I recognized his face, the toussled hair and a-few-days-growth beard, but couldn’t quite place him as he walked by my store Monday. He looked like a famous architect, leading a group of people on an architectural tour of Vancouver’s historic buildings.

It came to me when I got home —  I Googled an image of Tim Burton to confirm it was him. He was with a group of people who stood in front of my store, looking at the Europe Hotel, Gastown‘s iconic flat-iron building at 41 Powell, built in 1909. They went inside the Kimprints store and later went downstairs and looked at the basement storage room of  the Europe.

Burton and his entourage went further down Powell Street and looked at some other locations, including outside Incendio restaurant.

He’s directing a new movie called Big Eyes, which is about American painter Margaret Keane (born 1927 in Tennessee), who had huge success in the 1950s with her paintings of doe-eyed children and cats with big eyes. The movie is expected to touch on Keane’s legal difficulties  with her husband, Walter Keane, who claimed credit for his wife’s work in the 1960s.

According to newspaper accounts of the divorce case, Margaret claimed her husband locked her in a room and forced her to paint, while taking credit for her work. During the court hearing, Margaret demonstrated she was the artist by creating a painting in front of the judge and jury. Her husband claimed he couldn’t paint that day because he had a sore shoulder. The judge sided with her, allowing her to paint under her own name. After her divorce, she moved from San Francisco to Hawaii.

Amy Adams (who plays Lois Lane in the latest Superman movie) will play Margaret and Christoph Waltz will play her husband.

The Austrian-born Waltz was last seen in the Quentin Tarantino movie Django Unchained,  and was first introduced to Hollywood audiences in the 2009 Tarantino film Inglourious Basterds, resulting in his first Academy Award for best supporting actor (he won again this year for Django Unchained).

Filming of Big Eyes, which has a $10-million budget, starts near the end of July in Gastown (July 29 Update: Burton now is filming on Powell Street in Gastown, just east of the Europe Hotel). Burton is apparently a fan of Keane’s work and once had the artist paint a portrait of his girlfriend, now former girlfriend.

Here are a few of the photos from the Big Eyes set today in Vancouver, including some  ’50s convertibles and a Rexall Drugs store window on Alexander Street, in what is normally the Stussy Vancouver shop: 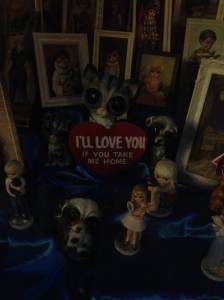 Below are two videos of Vancouver band Marianas Trench, who describe their new album, Ever After, as the “soundtrack to a dark Tim Burton rock opera that hasn’t been made yet.” Lead singer Josh Ramsay co-wrote Call Me Maybe with Carly Rae Jepsen and her guitarist Tavish Crowe. Ramsay also produced the song for Jepsen. Occasionally, I see Josh walking his dog in front of my store. He lives just up the street in Gastown. 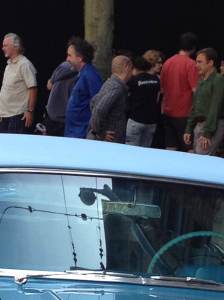 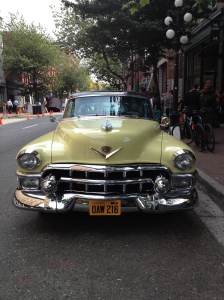 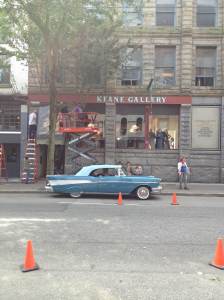 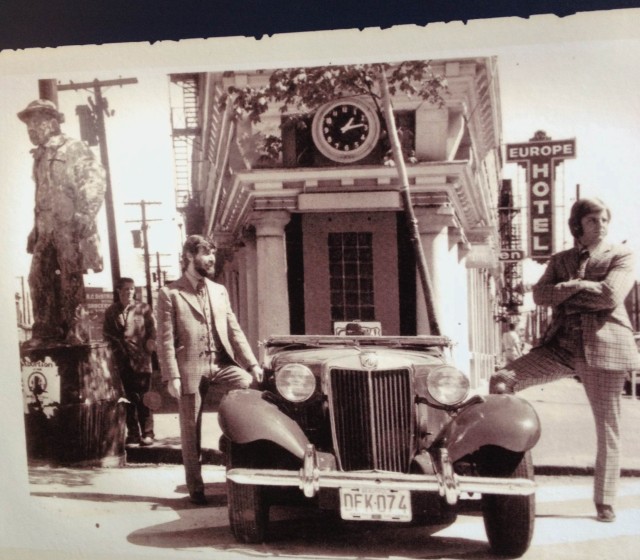 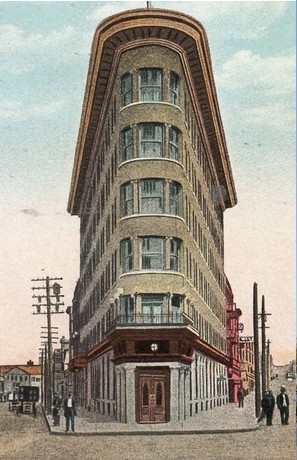 Here’s what the Europe Hotel first looked like when it opened in 1909 in Vancouver, Canada.

Here’s what the Europe Hotel looked like in 1931 when it had a beer parlour on the main floor — notice the spitoons on the floor by tables.
Photo by Photographer Stuart Thomson. City of Vancouver Archives Reference code AM1535-: CVA 99-3894
Click on this photo to enlarge.

Tim & I share an art school connection: I went to Chouinard Art Institute — Walt Disney was a patron of our downtown L.A. campus and he would sometimes visit, seeing what artists were producing in the Sixties. (One of my fellow students was then animator Terry Gilliam — I have an amazing story to tell about him, but more  later.) Many Chouinard students worked at Disney’s studios, which created exhibits for Disneyland. One was called Retlaw, which is Walter spelled backwards. Chouinard eventually became the California Institute of the Arts, aka Cal Arts, which is where Burton attended and studied animation (he’s 54 now, younger than me). He went to work for Disney. I can’t image how he survived, but he started making his own films while at the Disney studio.

In the past, I loved watching Tim’s collaborations with Johnny Depp.

1 Response to Is that movie director Tim Burton in front of my Gastown store?