Harem pants? We got ’em

Posted on September 17, 2014 by angelvancouver

One of the hot items for fall 2014 are harem pants (Angel is sold out of all the Desigual pants shown here), also called drop-crotch pants because the crotch is loose and baggy and the legs taper at the ankle. The design originally was based on much looser fitting pants from Arabia. There is also a similar design worn by the hill tribes in northern Thailand called Hmong pants. Below are the four styles of Desigual harem pants we have in stock for the fall, including one for girls: 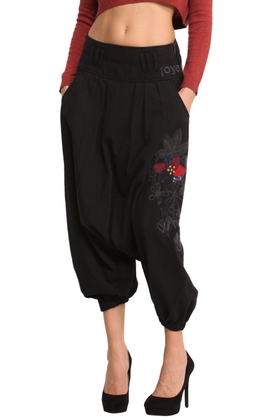 Angel Vancouver has the largest selection of Desigual on the West Coast of Canada for men, women and kids. We ship worldwide, including Australia & New Zealand. Desigual is designed in Barcelona and produces 1,000 new pieces every season.

If you’re looking for a custom hand-painted Angel shirt, call (604) 681-0947 or email me: jackie@angelpaint.com Here are two kids shirts I painted today:

Today’s music video is U Can’t Touch This by MC Hammer, who wore harem pants for this video (they were known as Hammer pants then):

Recorded in 1989, the song was released in January 1990 and was an instant smash, helping Hammer sell 18 million records. The song sampled the opening riff of this 1981 Rick James song, Super Freak:

Rick James had played in a Canadian band called the Mynah Birds with Neil Young and Bruce Palmer. The Mynah Birds recorded this 1966 song at Motown’s studio in Detroit:

Young and Palmer moved to Los Angeles and joined Buffalo Springfield, which released this song in 1966: For What It’s Worth, written by Stephen Stills:

And here’s Neil singing his Buffalo Springfield, Mr. Soul,  in 2005:

The 1967 original by Buffalo Springfield of Mr. Soul:

Co-written by Stephen Stills and David Crosby, the song was about Grace Slick of Jefferson Airplane. When the band broke up, Stills and Crosby formed Crosby Stills and Nash (with Graham Nash of The Hollies) while Young went on to start his solo career, later joining Crosby Stills Nash & Young. Buffalo Springfield did this reunion benefit concert in 2010:

Buffalo Springfield reunion: Written about Grace Slick of Jefferson Airplane while  jamming with David Crosby at his house. Said Steven Stills: :We got hung up on the F to D change in D-modal, which is mountain minor tuning. We kept playing it over and over and over again.”:

The original Buffalo Springfield version, which has a more sprightly tempo: